You are here: Home / Irish Legends and Folklore / Brian Boru Legend and History 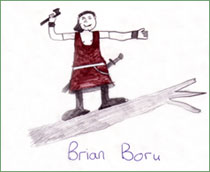 Brian Boru is remembered as a very famous Irish king. He was part of the family of the Dal gCais. The Dal gCais had its fort near Kincora in County Clare. He learnt the skills of fighting when he was young and grew to be a great and skillful fighter.

Brian Boru and his older brother Mahon Boru fought against the Vikings of Leinster. In 967 A.D. they had a great victory over their enemies and Mahon made himself King of Munster. Mahon was king for nine years. Then he was killed by other princes.

Brian made other kings accept him as their overlord. He made peace with King Malachy and they divided the country between them. Malachy kept the northern half while Brian got the bottom half. In 999 A.D. he defeated Maol Morda in a bloody battle because Morda and the Dublin Vikings wouldn’t submit. Brian made Malachy accept him as high king.

In 1013 A.D. Maol Morda fell out with Brian and war broke out again. Sitric the Norse king of Dublin called his Viking friends in the Scottish Islands and the Isle of Man to help them.

At the Battle of Clontarf, Good Friday 1014 A.D., a great battle raged on. In the end the Leinster men were heavily defeated. However Sitric, the Norse king, survived and wisely remained inside the walls of the town.

King Brian was too old to fight in the bloody battle. He was later killed in his tent by a Viking. His son and grandson were also killed in the battle.

Brian Boru is remembered as one of the greatest Irish kings that ruled Ireland.