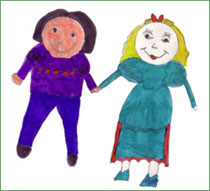 Grainne was the daughter of Cormac MacAirt, the high king of Ireland. No woman could compare to her beauty. Many princes and chieftains wanted to marry her but Grainne was proud and she spurned each one after another. Fionn MacCool wanted to marry again after his wife died. He heard about Gráinne.

He went to Gráinne and asked her to marry him. She said yes. That night a great party was given in honour of them. But Grainne fell in love with Diarmuid, one of Fionn’s warriors. Grainne put a sleeping draught to everyone except Diarmuid and tried to persuade him to take her away. But Diarmuid was loyal to Fionn. So Grainne put a magic spell on Diarmuid. If he did not marry her he would die from the magical powers. If he took her, Fionn would destroy him. So they left Tara and crossed the river Shannon.

With Fionn on their trail, Fionn’s son Oisin warned him that Fionn was closing in on him. Diarmuid ignored his warning. As they travelled southwest a warrior named Muadham became their servant.

Meanwhile Fionn hired three soldiers along with three poisonous hounds to capture Diarmuid. After Muadham left, the couple travelled north again. Diarmuid finally gave up being loyal to Fionn and he married Grainne.

Soon Grainne became pregnant. One night the couple heard a sound of a boar in the woods. Grainne, suspecting Fionn of treachery, could not dissuade Diarmuid from facing the boar. Diarmuid killed the boar with his sword and as he lay dying, he asked for a drink of water which had curing properties if drunk off the hands of Fionn. Fionn refused twice. Oisin threatened to kill him but Diarmuid died by the time Fionn had got the water.