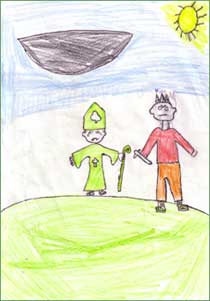 Niall was one of the great Irish kings. He was the only son of Eochaid Muighmedon, high king and his wife Catharann, daughter of an English king. Eochaid later married Mong-Fionn, daughter of the king of Munster, and had another four sons. These sons were Brian, Fiachra, Ailill and Fergus.

It is said that Mong-Fionn was jealous of her stepson Niall; she wanted Brian to succeed to Eochaid. She did not rest until she had Niall as an outcast and his mother reduced down to servant.

As Niall was entering manhood, he was returned to the court and welcomed by his father. One of his first acts was to restore his mother to her rightful place. Niall underwent many tests and did excellent on every one.

Niall’s stepmother still had her hopes for Brian and upon Eochaid’s death, she managed to get her brother king until Brian came of age. Once in power, however, Crimthann betrayed his sister and took full control of the kingdom instead of regency. To Crimthann’s credit, he proved to be a strong king and ruled for twenty years.

During his early reign, Niall consolidated his power and home by subduing his enemies and taking hostages from the families in opposition. Meanwhile the Picts were getting wary of the small Lirsh colony of Dalriada which is now Scotland. They attacked and severely damaged the colony. In response Niall ventured to Scotia Minor and the land of the Picts, here again subduing all and gaining submission through the taking of royal hostages – hence the name, Niall of the Nine Hostages.

After a short consolidation, he marched south with his Scot and Pict allies against the Romans in Britain. It was there that Niall’s forces took hostage one Succat, who is better known by his later name of St. Patrick.

Besides taking St. Patrick in his youth, Niall is known mainly for two things. First, he consolidated the northern region of Ireland and created a dynasty that kept his descendants High Kings of Ireland for six hundred years. Second, his military ability led him to the Irish taking control of all of Alba and a large part of Britain.

He seriously damaged the Roman’s ability to control Britain and even managed to carve out some Irish controlled territory in France. It is said this Irish empire was only eclipsed in size by Dathi’s, Niall’s nephew and successor.