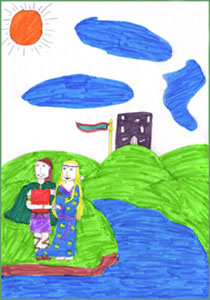 One morning the Fianna were deer hunting on the shores of Lough Lein in County Kerry. They saw a beautiful white horse coming towards them. Riding on the horse was the most beautiful woman they had ever seen. She wore a long dress as blue as the summer sky and studded with silver stars. Her long golden hair hung to her waist. “What’s your name and what land have you come from?” asked Fionn, leader of the Fianna. “I am Niamh of the Golden Hair. My father is king of Tir-Na-nOg,” she replied. “I have heard of a warrior named Oisin. I have heard of his courage and of his poetry. I have come to find him and take him back with me to Tir-Na-nOg.” “Tell me,” Oisin said, “what sort of land is Tir-Na-nOg?” “Tir-Na-nOg is the land of youth,” replied Niamh. “It is a happy place, with no pain or sorrow. Any wish you make comes true and no one grows old there. If you come with me you will find all this is true.” Oisin mounted the white horse and said goodbye to his father and friends. He promised he would return soon. The horse galloped off over the water, moving as swiftly as a shadow. The Fianna were sad to see their hero go, but Fionn reminded them of Oisin’s promise to return soon. The king and queen of Tir-Na-nOg welcomed Oisin and held a great feast in his honor. It was indeed a wonderful land, just as Niamh had said. He hunted and feasted and at night he told stories of Fionn and the Fianna and of their lives in Ireland. Oisin had never felt so happy as he did with Niamh and before long they were married. Time passed quickly and although he was very happy Oisin began to think of returning home for a visit. Niamh didn’t want him to go but at last she said, “Take my white horse. It will carry you safely to Ireland and back. Whatever heppens you must not get off the horse and touch the soil of Ireland. If you do you will never return to me or to Tir-Na-nOg.” She did not tell him that although he thought he’d only been away a few years, he had really been there three hundred years. Ireland seemed a very strange place to Oisin when he arrived. There seemed to be no trace of his father or the rest of the Fianna. The people he saw seemed small and weak to him. As he passed through Gleann-na-Smol he saw some men trying to move a large stone. “I will help you,” said Oisin. The men were terrified of this giant on a white horse. Stooping from his saddle Oisin lifted the stone with one hand and hurled it. With that the saddle girth broke and Oisin was flung to the ground. Immediately the white horse disappeared and the men saw before them an old, old man. They took him to a holy man who lived nearby. “Where is my father and the Fianna?” Oisin asked. When he was told that they were long dead he was heartbroken. He spoke of the many deeds of Fionn and their adventures together. He spoke of his time in Tir-Na-nOg and his beautiful wife, Niamh, that he would not see again. Although he died soon after, the wonderful stories of Niamh and Oisin have lived on.