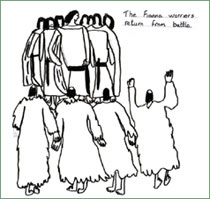 The Fianna lived many hundreds of years ago. Every man of the Fianna was chosen for his strength and bravery and was specially trained in warfare and was made a champion among warriors.

Usually before any man could officially become a Fianna warrior he had to undergo some tests:

This band of warriors were sworn to fight for the high king of Ireland and to keep the peace among the sub-kings of Ireland. When there was peace they lived lives devoted to the chase, for they were great hunters and food was never in short supply because in that time Ireland was heavily wooded where the boar, the deer and the wolf roamed in plenty. The Fianna hunted with their famous dogs – the Irish wolfhound, as large as a small pony and now, alas, almost extinct. In a single day’s hunting it is said that they would go from Killarney, in County Kerry, in the west to Ben Eadar in the east, near where Dublin stands today, crossing the trackless bogs and forest and climbing the mountains’ slippery sides. A wet or a fine day, winter or summer, were all the same to them, for they heeded neither wet nor cold.