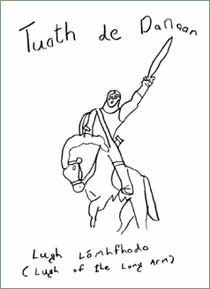 Once upon a time, thousands of years ago, there lived in Ireland a race of tall, beautiful people. They loved music, poetry and sport and they were called the de Danann [people of Dana] because they descended from the goddess Dana.

Then one day a savage band of robbers came over the sea from Scotland. Their king was an ugly giant called Balor, with only one eye, but that eye had the power of magic. One look from it was enough to kill a man or even a whole army. This gave the robbers a mean advantage over the de Danann and they soon defeated them and made “Balor of the Evil Eye” King of Ireland.

He was so powerful that he made the de Danann work as his slaves, digging ditches, chopping firewood, sweeping paths and paying heavy taxes. Once a year every man had to give him one ounce of gold and one-tenth of his wheat or cattle.

One day a Druid told Balor that sometime in the future his grandson was going to kill him. Balor’s daughter had triplets and they were sentenced to death. One of them survived and his name was Lugh.

By the time he was eighteen he had become a very strong and brave warrior. A druidess had taught him every skill and talent in the world. He went to the home of the chief of the de Danann at Tara to get a job. After much persuasion he eventually got a job. When the chief realized how talented “Lugh Lamhfada” [“Lugh of the Long Arm”] was he knew that at last he had a warrior who was capable of killing Balor.

The day came when the de Danann were due to pay their yearly tax to Balor. Each year they all went together to hand over their taxes but this time the de Danann were not going to pay, but they were going to fight instead. Balor’s men were killed by the hundreds and just when it seemed that Lugh and his warriors were going to win, Balor himself came onto the battlefield.

By now Balor was an old man and his great eyelid drooped over his one eye. So that he could still use it as a deadly weapon he had fixed a handle to the lid which his warriors could lift with ropes. When they did this it was then the turn of Lugh’s men to die by the hundreds and the chief of the de Danann was amongst the dead. Then Lugh got a great stone and slung it with all his force into Balor’s eye. The stone drove Balor’s eye through his head and out the other side, so that it now looked on his own men and wiped out his own army.

Balor had died at the hands of his grandson as predicted and Lugh was made chief of the de Danann.